Amazon is planning on giving even more products the “add-on” tag in a move that will no doubt frustrate millions of sellers and customers all around the world.

Add-on items are generally low-cost items sold on Amazon by sellers of all kinds that can only be purchased from the website if they’re bought alongside a more expensive item. Add-on items can only be bought if the customer’s cart totals $25 or more, forcing buyers to spend more money on Amazon than they might otherwise want to.

Add-on items are generally small trinkets such as markers, playing cards, lipstick, beauty care and the like. Not every item of those designations gets slapped with the add-on tag, but enough do that it causes frustration to many customers who log on to Amazon to specifically get one of those things.

Amazon Prime members have the same limitations, even though they’re paying for Amazon’s premium service. The thought process behind the existence of such items is that Amazon isn’t making much money off of shipping $5 worth of lipstick on a two-day expedited shipping process (in the case of Prime users). While Prime members don’t have to pay for shipping, Amazon still has to pay for the items to be transported.

Amazon continued to ship these items even though they were losing money by doing so for years in order to shore up brand loyalty, but ultimately it just wasn’t sensible for Amazon to allow customers to do that. The add-on function came along as a result, and now it looks like it’s going to expand.

Because of the rising costs of shipping, Amazon had to make a change to ensure it wasn’t losing money on these small purchases. Bloomberg has the specifics on the cost changes:

Fulfillment expenses — the cost of storing, packing and shipping goods — surged 43 percent in 2017 to $25 billion, outpacing revenue growth of 31 percent that year.

As a result, almost every item sold on Amazon that costs less than $7 will be designated an “add-on” item, according to the report from Bloomberg.

That’s a significant number of items. Think about it: how many items have you bought online that have cost less than $7? That’s going to have a significant impact on the convenience of online shopping for customers, sellers, and even vendors.

These small items will likely see a significant drop in order numbers. Customers who normally would go online just to buy a small item will now have to stock their cart full of other products, which may be a step too far for some customers. 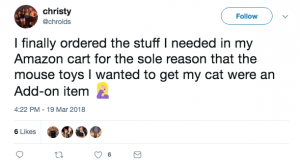 Amazon is now dealing with an internal tug-of-war. The company is continuing to drop prices on items to stay ahead of Wal-Mart and other online retailers, but now such cheap items are likely to see fewer orders because customers will be forced to order something else with them in order to get the product they actually want. Why pay $25 for that $5 lipstick when all you wanted was the lipstick?

But one thing to consider is that vendors and sellers who distribute these small items could see their profits drop as well. Amazon isn’t the only company that sells these items online; many companies both small and large have their items slapped with an “add-on item” label. Amazon’s decision impacts these companies too. While Amazon might be slashing costs, these companies and businesses are losing profits.

At the same time, Amazon has to consider what’s sensible for the company and its long-term strength. Delivering that $5 lipstick without charging for the shipping isn’t going to cut a profit for Amazon. It’s a difficult position for Amazon to be in, and perhaps the company will re-consider if it stops being profitable for Amazon to enforce these rules.

One concern that many have expressed is that Amazon Prime might start to flounder as a result of the increase in add-on items. It seems like an extreme reaction for customers to ditch their membership over a handful of cheap items, but many customers likely use Prime primarily for simple purchases on items that cost $7 and less. It’s much more convenient for these customers to buy toiletries from the comfort of their couch than by going out to the store just to buy a couple of items.

But if customers are forced to spend $25 no matter what, they might reconsider their habits.

As Madison.com points out, there are some other reasons customers might consider abandoning Prime, with this being a potential tipping point.

As Madison.com notes later in the article, “there’s a tipping point somewhere.” A handful of customers on Twitter are already upset about Amazon’s decision to create more add-on items, and it’s impossible to know the exact impact it will have on the online marketplace until it happens.

What This All Means Going Forward

Again, it’s impossible to know the exact impact of this decision until the add-on items start to increase. Sellers and vendors could be in serious trouble because of Amazon’s decision. On the other hand, you could argue that giving more items the add-on label will force customers to purchase more small items, which could improve business for those sellers. If I need to spend $20 more to get that $5 lipstick, I might as well buy the shampoo I’ve been meaning to get too.

If the decision starts to go south for Amazon financially, they will likely pull the plug. A lot of changes are looked upon poorly when first instituted, and perhaps this is an example of that. But for customers, sellers, and vendors alike, this will be something to monitor as it could impact the way they trade online for years to come.